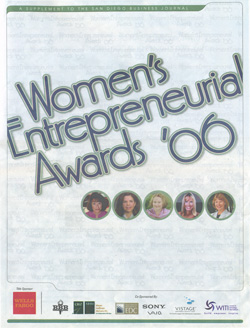 When asked if being a woman in construction has affected business positively or negatively, the president and founder of Coffman Specialties Inc. replied frankly, “I have never seen it either way.”

As the behind-the-scenes organizer to with revenues of $88.25 million last year, Coffman said she just focuses on doing her job. Coffman Specialties ranks No. 1 on the San Diego Business Journal’s List Of Women-Owned Businesses in terms of gross 2005 revenues.

Like most successful businesses, Coffman Specialties did not develop overnight. In 1990, when her husband, Jim sold his construction company, Coffman’s 12-year employer, she mused that perhaps here was an opportunity for a new business venture of her own.

Based in a modest office in Pacific Beach, Coffman Specialties started off subcontracting for companies that just needed to made their goals to qualify for the federal Department of Transportations’ designation as a Disadvantaged Business Enterprise, or DBE.

Coffman capitalized on her construction experience, and although 1991 revenues showed only $320,000, she was on the road to success.

“Eventually the fact that we were a DBE was less of an issue compared to our performance,” said Coffman, 56. “We produced a very good product.”

During Coffman Specialties’ second year in business, company revenues grew to exceed $6.2 million. This marked the beginning of a steady upward trend for the contractors, whose revenues jumped to more than $30 million by 2000.

“Concrete paving has always been the meat of our existence,” she said. “We owe early and current success to concrete, and it can be a tough area in construction. You have to have a good eye for projects that may not have a lot of bidders.”

Currently employing 249 people between the San Diego and Phoenix offices, Coffman knows that trusted employees are the key to this business.

“You work a lot, you give up a lot,” Coffman said. “But of course, you gain a great deal. You only dream of vacation days because there’s way too much work, and when the work lets up, you have to go find more. Only in the last few years have we allowed ourselves some days off, and that is due to find great people that we trust to leave in charge, combined with great training programs.

The concrete business, more so that any other subcontracting field, heavily depends on public projects such as the Maricopa County Flood Control District project that Coffman is spearheading. Despite the most talented and experienced of teams, concrete subs can suffer when public funding tightens.

For this reason, Coffman Specialties expanded it business into general contracting five years ago.

Confident in her ability to grow and adapt, Coffman has taken prudent steps towards diversifying the company’s market in the past year.

“We used Caltrans (California Department of Transportation) in the past, and now there are changes that have created some problems for us,” Coffman said. “Some districts are more difficult. We are branching out, exploring other markets such as irrigation districts to avoid too narrow a niche. Same path, more owners.

The diversification also has invited some new struggles, according to Coffman. Moving from sub to general contracting has created natural competition among other general contractors with whom Coffman has worked for years.

Having gotten her start with the help of many of these contractors, a big concern of Coffman’s has been maintaining good company ties following the changes.

“It was tricky because we still do some subcontracting work and didn’t want to burn bridges,” she said. “Fortunately, the relationships we’ve built over the years were strong enough to work out areas where each of us could bid for jobs.”

According to Coffman, the booming Phoenix market invites a lot of job opportunity, so her current focus includes expansion in the Arizona market.

Coffman hopes to continue producing more of the same.

“I wanted to keep focusing on what we’ve been doing. I have a team that I trust, I’ve found good people and feel good about the work that we do,” Coffman said.