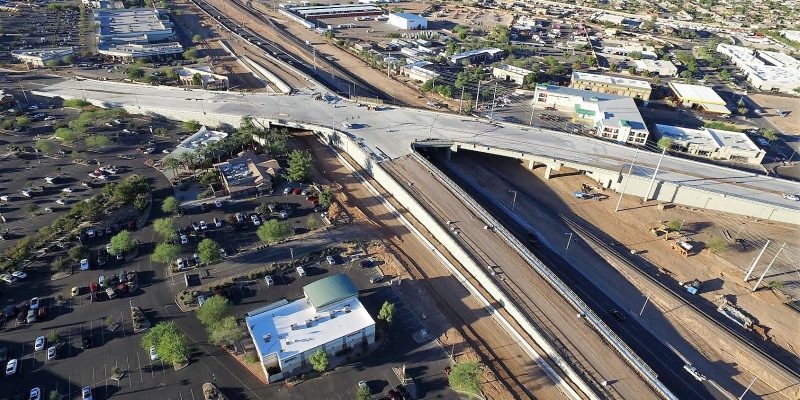 The Arizona Department of Transportation (ADOT) hopes to soon reopen a section of Bell Road in Surprise, Arizona, that has been closed since April. The road was closed as part of a project to construct a new Bell Road bridge over U.S. 60 (Grand Avenue) and the adjacent BSNF railroad tracks. With the aim of increasing safety and reducing congestion, the bridge is replacing the previous ground-level intersection and crossing.

The closure was planned in order to reduce overall construction impacts and speed the entire project. The work is being carried out in a busy commercial section of Surprise, a burgeoning community northwest of Phoenix, which Forbes magazine listed, along with two neighboring municipalities, as among the 10 fastest-growing suburbs in the United States.

The full closure of Bell Road between 134th Avenue and West Point Parkway began in April, timed to occur after the conclusion of the Cactus League season at Surprise Stadium. The goal of the project team was to reopen Bell Road to traffic in time for the holiday shopping season, and the current estimate is that it will be open by the end of the year. Although not all of the work will be completed at that time, reopening Bell Road will allow improved access to businesses in the area.

The project began in January, with contractor Coffman Specialties, Inc., focused on work along the center median of Grand Avenue near Bell Road. That construction along the Grand Avenue median prepared for the addition of the median on- and off-ramps connecting to the new Bell Road overpass. The work was done in stages, with the initial activity focused on the center median area and the ramp construction. Later in the schedule, traffic switched toward the median to allow construction of the Grand Avenue “through lanes” in the area.

Transportation officials see the new interchange as an important improvement. Laying out the alternatives, a Design Concept Report in January 2015, said building an interchange would provide a significant benefit by constructing a new grade-separated intersection that would eliminate the existing BNSF Railway at-grade crossing and allow traffic movements on U.S. 60, Bell Road, and between U.S. 60 and Bell Road to occur at the existing intersection location.

Steve Elliott, Assistant Communications Director for Public Information for Arizona DOT, explained that a number of factors went into deciding on the preferred alternative for the design of the interchange project.

The MUD interchange design means that through traffic on Grand Avenue will no longer stop at Bell Road. Instead, the two roadways will be connected via new on- and off-ramps constructed within the Grand Avenue median.

Elliott noted that public agencies involved in the development and evaluation process included ADOT, the Federal Highway Administration, the Maricopa Association of Governments, Maricopa County Department of Transportation and the City of Surprise.

The original cost estimate for the project was just over $66.5 million, with $14 million going to right of way acquisition. And, although over $52 million was programmed for design and construction, Elliott said, “The contractor bid came in roughly 20 percent less than programmed. This is a typical trend for a design-build project.”

One notable aspect of the project was the use of a mechanically stabilized earth (MSE) wall. Not uncommon, Elliott notes, and it did not require deploying any special machinery, but “still unique and requires use of an engineered fill.” The project also has several custom aesthetic treatments (Fence, Barrier finish, MSE panel finish). As in a growing number of projects, LED street lighting will be used.

Construction is continuing, but some estimates on quantities are:

Structural Concrete: 7000 cubic yards
Portland Cement Concrete Poured: 20,000 square yards
Asphaltic Concrete: 25,000 Tons
Borrow: 60,000 cubic yards
Reclaimed asphalt and concrete have been used.
The contractor crew size varies depending on activities of the day, Elliott said, “but we have had as many as 110 employees of the contractors and subcontractors personnel working in one day on various items.”

The contractor hasn’t encountered any major difficulties to date. Elliott said, “In this high commercial area, utilities were the biggest unknown. Though there were some surprises along way, no major delays resulted.”