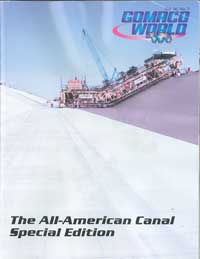 Not Your Ordinary Paver – A quick look at any preliminary drawing of the All-American Canal paver will show you that this paver is not your ordinary canal paver. This canal will be a true slipform project. GOMACO built a canal slipform paver in the late 1980s for the Coachella Canal project in southern California (GOMACO World, Vol. 17, No. 2). Coachella’s new concrete lining was slipformed underwater with approximately nine feet (2.7 m) of water flowing in the canal. Much of the information learned on the Coachella project was incorporated into the All-American equipment.

A GOMACO GP-4000 prime mover will be set on top of a Coachella-style framework to provide the power plant and control system for the paver. The framework itself will be ten feet (3 m) tall. The mold sections are a 5000 series paving mold that has been modified slightly. The machine is mounted on four tracks… four very large tracks that are 13 feet, nine inches (4.2 m) long, 30 inches (762 mm) wide and 40 inches (1016 mm) high.

Supplying the Concrete – Placing concrete down the 40 foot (12.2 m) long, 1.75:1 or 2:1 slope and 25 foot (7.6 m) wide canal floor is a serious challenge. One of the unique aspects of the paver is its concrete distribution system mounted to the front. Concrete trucks will dump into a standard GOMACO RTP-500 rubber-tracked placer which will then place the concrete into the distribution system on the paver.

The canal’s new lining will be four inches (102 mm) thick and will be slipformed in two paving passes.

Changing Widths and Slopes – The design of the canal itself presented an interesting challenge for GOMACO engineers while designing the paver. The slope of the canal is not constant and the length of the slope is variable. The paver has to be able to accommodate the changes as quickly and easily as possible.

Two different types of end cars are mounted to the framework of the paver – a fixed end car and an adjustable end car. The adjustable end car can be hydraulically slid in or out while the paver is stopped to accommodate the different slopes. It allows the length changes to be made without having to add or remove any sections of framework.

The other crucial feature is the powered wedge. When the length of the slope changes, it also changes the angle of slope on the canal and the pivot point on the paver. The powered wedge makes the machine adjustable to the canal’s different angles.

Fracture Joints – The specifications on the canal require a longitudinal and transverse fracture joint every 15 feet (4.6 m). Four massive spools of cross-shaped, polyvinyl chloride rubber strips will be mounted to the paver. The material will be inserted by a specially designed inserting mechanism into the four inch (102 mm) thick concrete on the go, during the slipforming process. The longitudinal water stops will then create the canal’s fracture joints.

“It creates a 15 foot (4.6 m) section for the concrete to fracture to allow for soil movement and other conditions,” Jim Homan, GOMACO’s project manager for the All-American Canal equipment, said. “Once the fracture takes place, the water stop is bound into the concrete slab and allows it to move and flex. It’s also creating a seal that keeps water from leaking through the canal into the soil below.”

The Transverse Water Stop – The second piece of equipment GOMACO has built for the All-American Canal paving train is the water stop machine. It follows directly behind the canal paver inserting the transverse water stop material every 15 feet (4.6 m). The production rate on the project is all dependent on this one machine and that created an extra challenge in the design process.

The inserter is made of eight foot by eight foot (2.4 x 2.4 m) frame sections, with the outside dimensions the same as the paver. It features a fixed and hydraulically-adjustable end car and powered wedge similar to the paver to match the canal profile.

The top of the rubber water stop material is placed one-eighth of an inch (3 mm) below the surface to allow for controlled cracking in the canal. The process is repeated every 15 feet (4.6 m) along the length of the canal.

A 17 foot (5.2 m) long cylinder and float pan follows the inserter. The cylinder helps finish and seal the surface of the canal.

The water stop machine has to be able to keep up with the paver so the concrete doesn’t cure and become too hard to insert the material. That’s one challenge. Another challenge is project specifications.

“This machine has to be able to insert a joint every three minutes to be able to pave five feet (1.5 m) per minute,” Steve Johnson, GOMACO Project Designer, said. “If they can keep concrete in front of the paver for that kind of production, this machine is certainly capable of keeping up.”

Extensive research and testing took place to create the insertion device. Not only does it have to place the material on-the-go in the paving process, but place it at the required depth, standing in the upright position, and with the concrete consolidated around the material.

“The concept itself is relatively easy,” Homan explained. “But in the environment the inserter has to work in, the complications of going through a radius, and other aspects make this an interesting challenge and this a very important machine in the canal paving process.”

The Work Bridge’s Unique Design – Like all the machines for this project, the work bridge is a unique design with several different aspects to it. It mirrors the paver and water stop inserter in several features to match the changing dimensions of the canal, including a fixed and hydraulically-adjustable end car and powered wedge.

The console on the canal’s work bridge will be similar to the one used on the water stop inserter. The continuation of the same components on the different canal machines helps out in the field with operation and maintenance.

The framework itself is four feet (1.2 m) wide by seven feet (2.1 m) tall, with the console located at the bottom of the machine. It will run on Series One tracks equipped with 17.7 inch (450 mm) rubber track pads. During the second paving pass, the machines will be running on the concrete from the first pass. The extra large track pads will keep the work bridge from cracking or marring the surface of the new canal.

An Auto-Float® will be mounted to the back of the work bridge and will finish while working up the slope. It will lift off the concrete, cycle back down to the bottom of the canal and complete another pass.

New Canal Assembly and Testing Site – The final phase of the equipment’s design and manufacturing was full machine assembly. GOMACO has constructed a new canal assembly and testing site at their company headquarters in Ida Grove, Iowa. The site includes a new concrete pier that is 16 feet (4.9 m) tall, 60 feet (18.3 m) long, and 72 inches (1829 mm) wide. It can accommodate almost any size canal paver, as the All-American Canal equipment has proven.

Each piece of the equipment was fully assembled and then placed on the pier so engineers could test its various features and performance capabilities. The canal equipment was later disassembled and shipped. Over 20 truckloads were needed to transport all of the canal paving equipment to California.